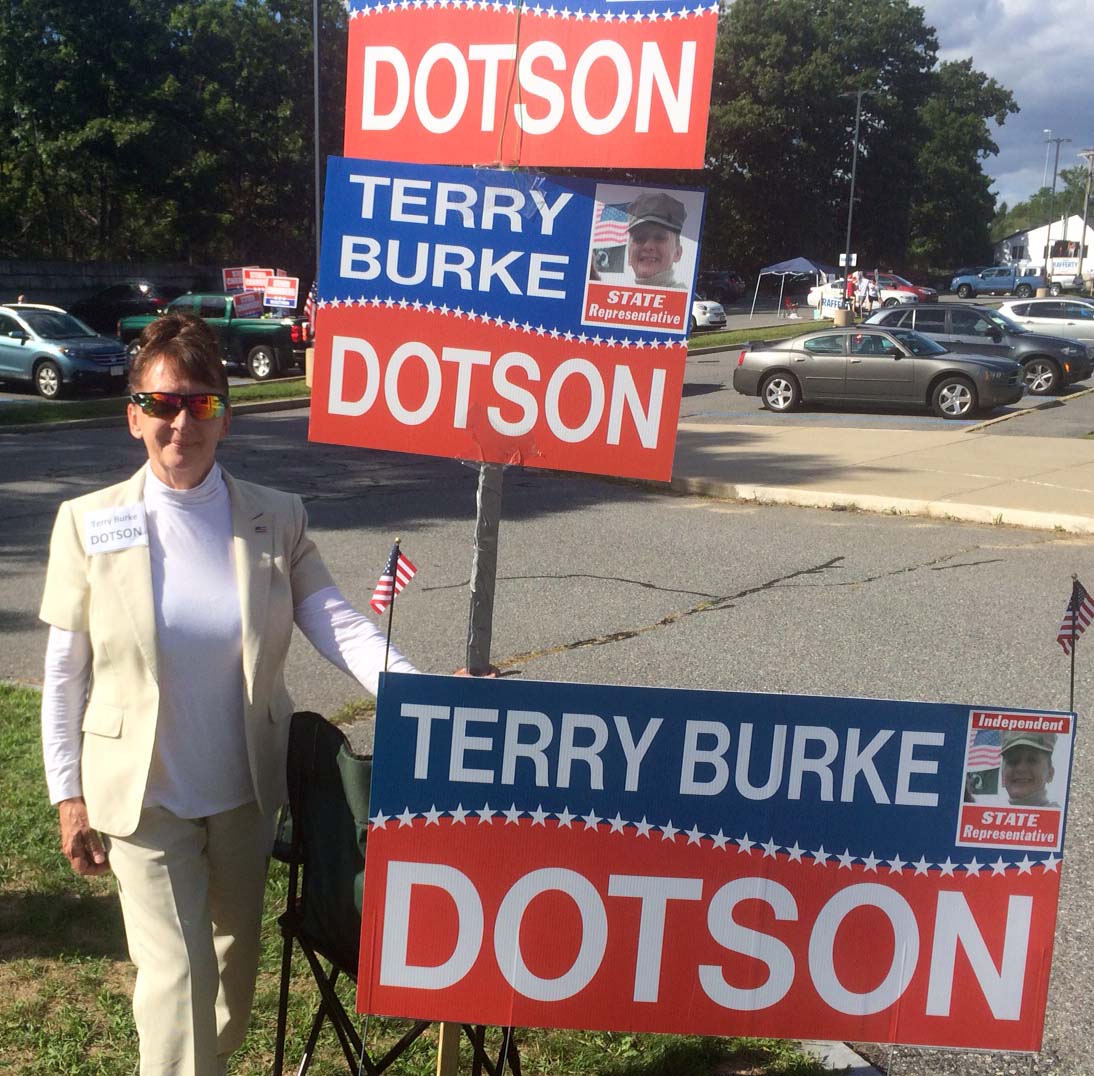 I am the most qualified candidate to serve as your next State Representative for the 7th Worcester District of Millbury, Auburn, Charlton’s Precinct 4, and Oxford’s Precincts 2 & 3.

I am an INDEPENDENT candidate…and I believe in WORKING for a living.

After more than 22 years of taking your money, my opponent, Paul Frost’s reason for you to reelect  him is a “100% voting attendance”.  From the numbers on his website that means showing up, an average of approximately 24 days a year for roll call votes, to cast 12 votes.  How long would you last in your job if you only showed up about 24 days a year?

I served 33 years in the Military Reserve in the USANG, USAFR, USNR, and USMC,  with “Honor” and “100% Attendance”.  My last deployment was in Afghanistan.  As a leading Petty Officer,  I helped my units earn “Outstanding Unit Citations”.  Among my personal awards were “Outstanding Airman of the Quarter”, and “Outstanding Sailor of the Quarter”.

My campaign signs have an American flag, and are Red, White, and Blue.  Frost’s are Yellow.

Before I decided to run against Frost, I successfully got a Resolution passed through our Millbury’s Town Meeting to be brought for passage in our Massachusetts Legislature.  Frost refused to return my calls, blocked my Emails, took no action on Millbury’s Resolution for over 4 months.  Finally, he let it DIE in the House Ways and Means Committee without any representation from him.  He did not represent Millbury.

Over the years, I have never found him at the State House.  Use elevator 5/6 at the side entrance, pass by all the janitorial supplies and stored water and furniture, until you come to the locked door of Room 542.  That is Frost’s office, 15 steps from the Military wing, and they don’t know who he is.

He pleads to keep his job until he can retire at age 60, so that he can put his 3 daughters thru college. Most of us have to work second jobs and take out loans.  He hasn’t exerted the effort to better himself in preparation for another job. That’s no reason to be reelected.

Since he has been in office, I’ve completed my second Master’s Degree in Health Education, and an Associate’s Degree in Medical Administration.   For the last 5 years I have been working full-time to help local public high school students with Learning Disabilities.

During this COVID-19 pandemic, I offered to volunteer my medical services at a local testing station to relieve providers during the afternoons and weekends.  Volunteers were not accepted,  only paid staff.  I did not want another paid job.  As suggested by the school administration, I took Webinars and earned PDP’s toward my MA teaching license recertification.  I completed 87 Webinars to include a “Paraprofessional Training Course” and an “Emotional CPR Course”.

He claims that he fights for state local aid for our town’s schools, roads, etc.  State Aid like Unrestricted Lottery, and Chapter 90 and 70 Revenues are based on formulas of population, road mileage, and  employment levels, etc.    He doesn’t “fight” for them.  He announces these predetermined payments to the towns in the newspapers to impress you.

I was recently reelected to the Millbury Planning Board.  I will continue to serve there as well as the Millbury’s Ponds and Lakes Commission and Youth Commission.

Open dialog in public sessions to discuss and attempt to resolve issues of serious concern, instead of resorting to violence.

I believe in “doing” the Right Thing…not “talking” about it.